Our team consists of passionate people who inspire, support, and share knowledge with each other. 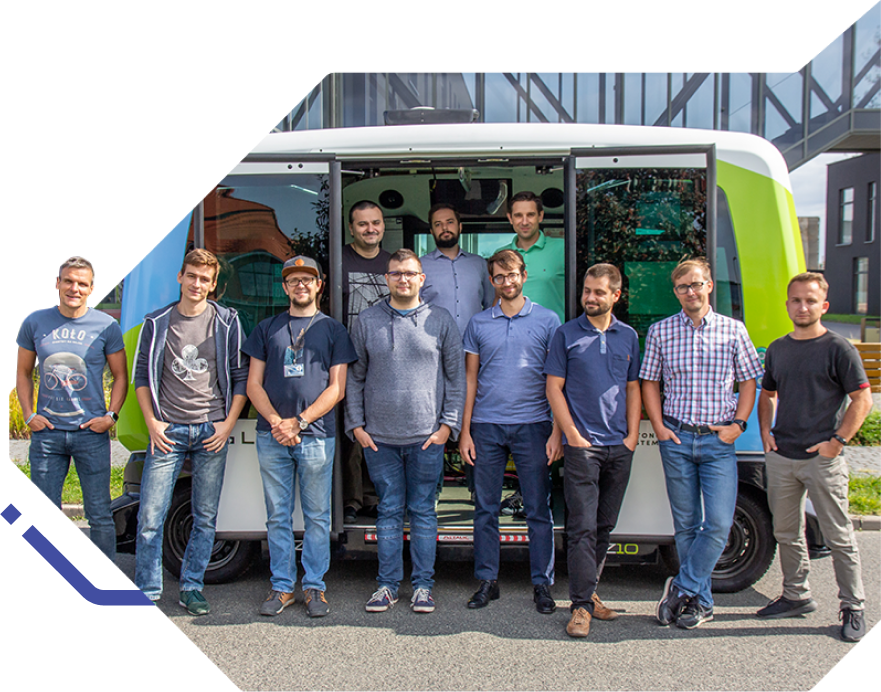 Versatility is the focus of our team as we avoid specialization and ensure knowledge sharing. Our engineers feel comfortable performing various tasks and as a group know how to communicate effectively and share their experience. As a result, everyone can grow on different levels and have an impact on each of system element, which translates into a well-made product.

We appreciate when a person is able to organize their own work. In everyday teamwork it is very important to be ready to make individual decisions, but we can always count on mutual support. Our engineers are aware of their direct influence on the autonomous system, which also translates into their great creativity and ongoing search for innovative solutions.

Due to the innovative nature of our project, we operate in a dynamically changing environment. We are constantly testing, checking, verifying and implementing the best solutions in our system. As autonomous technologies are currently a booming segment of the market, we are open to novelties and introducing changes. 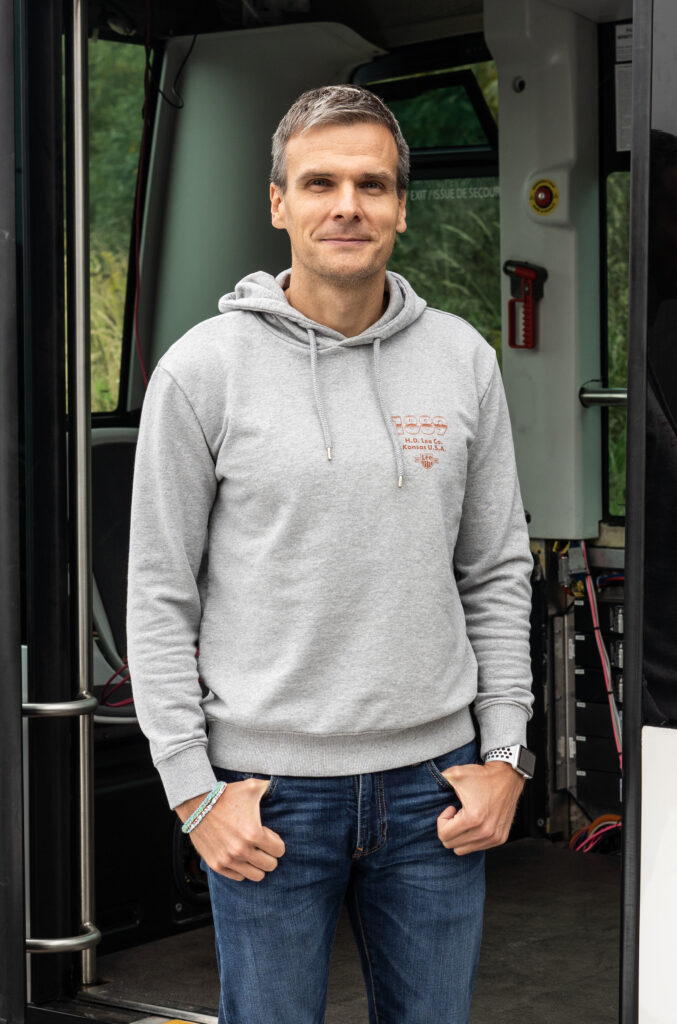 Most people just call him Jaro. Even though he obtained a degree in Information Technology, already in college he discovered that he got the best kick out of creating new businesses. Thus, he decided to start his first company, i.e., Future Processing, which he managed for almost 20 years. Starting with a few engineers, the company has grown to nearly 900 people and is currently developing advanced IT projects for clients from all over the world.

Our founder is a true visionary who does not shy away from difficult challenges, while remaining grounded. The Puls Biznesu magazine included him in its “500 Managers” rank aimed at promoting top Polish entrepreneurs. He has also spoken at numerous conferences and industry events. With a bit of luck, you can meet him putting his blood, sweat, and tears at triathlon races or speeding through a highway in his red Tesla.

A programmer with 20 years of experience. He wrote his first program in BASIC on an 8-bit Atari computer back in the previous millennium. Since then, he has worked on systems of various sizes in numerous domains. To this day, he finds great joy in making a machine perform a given task, whether it is optimizing a disk, processing financial transactions, reconstructing blood vessels or driving an autonomous vehicle.

As a member of our team, he is responsible for implementing the autonomous driving system in a minibus, which requires him to deal with a wide range of topics, from vehicle mechanics, through integrating various sensors, preparing the software platform and system architecture, all the way to artificial intelligence and machine learning. Apart from programming, he is interested in all things engineering and he is a whiskey connoisseur in his private life.

Automation/Mechatronics Specialist. A graduate of the Silesian University of Technology. An automotive enthusiast since always, he is ready to play anyone in a game of recognizing car models, down to specific generations. Over time, he had deepened his knowledge from toy cars to detailed vehicle specifications at a General Motors factory, where he worked for 9 years, specializing in component quality and production processes. He was responsible for a pilot team implementing new models and auditing suppliers.

As a member of our team, he is responsible for two vital areas: organizing the autonomous team’s work and implementing a new autonomous vehicle, primarily in the fields of BOM, the purchasing process, and the supply chain. In his private life he is a happy husband and father, a sea helmsman, a windsurfer, and a ski instructor.

He has been a curious scientist and explorer of things big and small ever since his childhood. In 2014, he received a doctoral degree in technical sciences. He is an academic lecturer at the Opole University of Technology’s Institute of Information Technology and he wrote numerous scientific publications, mostly concerning image processing. His main tools are cameras, lidars, and other radars.

As a member of our team, he is currently working a lot with measurement equipment. When he sees a bus or other vehicles, he immediately covers them with sensors in his mind. In his private life he is a cryptocurrency market enthusiast who has seen all possible crypto exchanges and witnessed impossible events. From time to time, he is also passionate about sports, willing to ride many kilometers on his bike and run any distance in a company T-shirt.

A programmer with 12 years of professional experience and a graduate of the Silesian University of Technology. He takes on any programming-related task with great enthusiasm, from mundane embedded systems and FPGA, through desktop apps, back-end and front-end, to cloud solutions.

As a member of our team, he works as a software engineer. He is responsible for developing the sensory data acquisition system, integrating the GNSS technology with the autonomous driving platform, and for tasks involving embedded system programming. In his free time, he is an avid musician who plays the guitar for a band called Hipokamp as well as a beer and jazz connoisseur.

He began his education as an electronic engineer and continued it as an automation engineer to eventually find a profession at the crossroads of automation, programming, and control systems. His journey through the world of autonomous vehicles began in college when he developed an autonomous navigation system for a small catamaran used for measurements. Today, he is developing solutions for autonomous vehicles together with his team, focusing primarily on sensory fusion and measurement data acquisition techniques. Some perceive him as a perfectionist, others as an analyst. Thanks to a watchful eye and attention to detail he can spot errors and typos that are difficult to find. It makes a lot of sense since “errors in the text and errors in the code all come together in life”. He loves adhesive tapes and firmly believes they can fix every problem.

The ability to create, experiment, and search for unusual solutions is what lets him put his creativity to use. Łukasz has many interests, including cryptocurrencies, somnology, computer vision, all the way to automation system solutions. As a former public transportation enthusiast, he wants to improve it by participating in the creation of our ambitious projects.

A programmer and a graduate of the Silesian University of Technology. Already in college he became interested in machine learning and decided to pursue it professionally. He worked on a project involving the analysis of images from city surveillance cameras, among others. He is interested in more things than he has time for so he tries to focus only on the most ambitious ones, including vehicle autonomy.

As a member of our team, he is working on path planning, control, and testing our algorithms in simulation. His personal motivation for developing autonomous vehicles is his dislike for driving and he will be very happy if our vehicle can take this task off his hands. 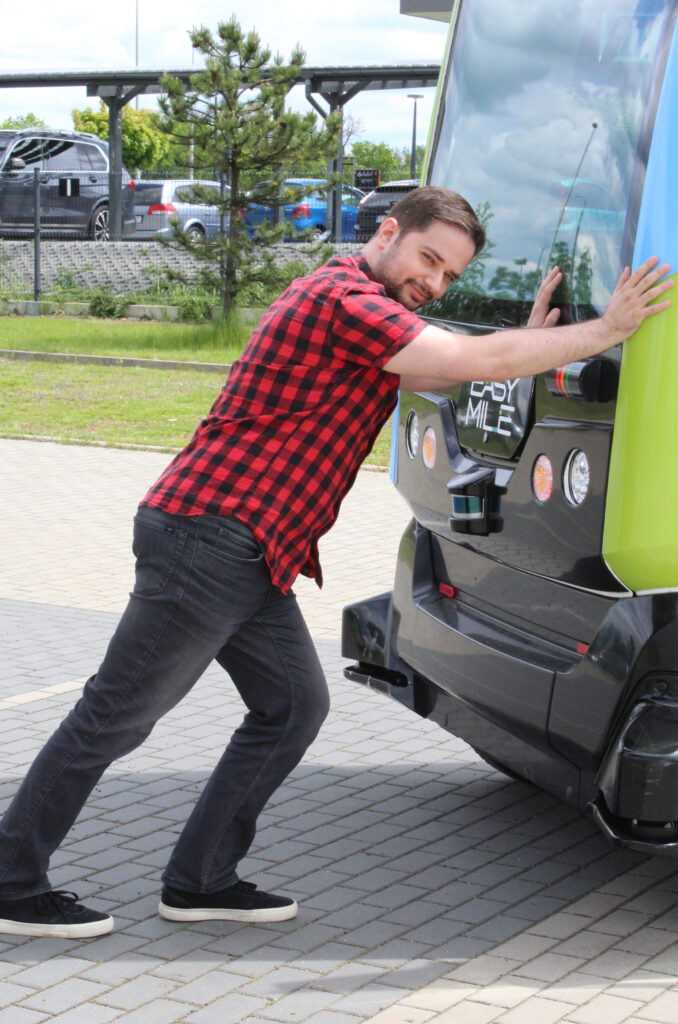 An algorithm specialist and software engineer with 10+ years of experience who is interested in artificial intelligence and computer vision. He is well experienced in commercial software engineering, which enables a unique approach to developing solutions involving machine learning. He specializes in areas such as design, implementation, and validation of complex systems.

His guiding principle is that you can learn and discover everything so his vocabulary does not include the words “it cannot be done”. When necessary, he is ready to get his hands dirty, taking our test vehicles apart to the last screw. In his free time, he enjoys learning how things work, especially different mechanisms. He is a Formula 1 enthusiast, not only in terms of racing, but also its technical aspects. 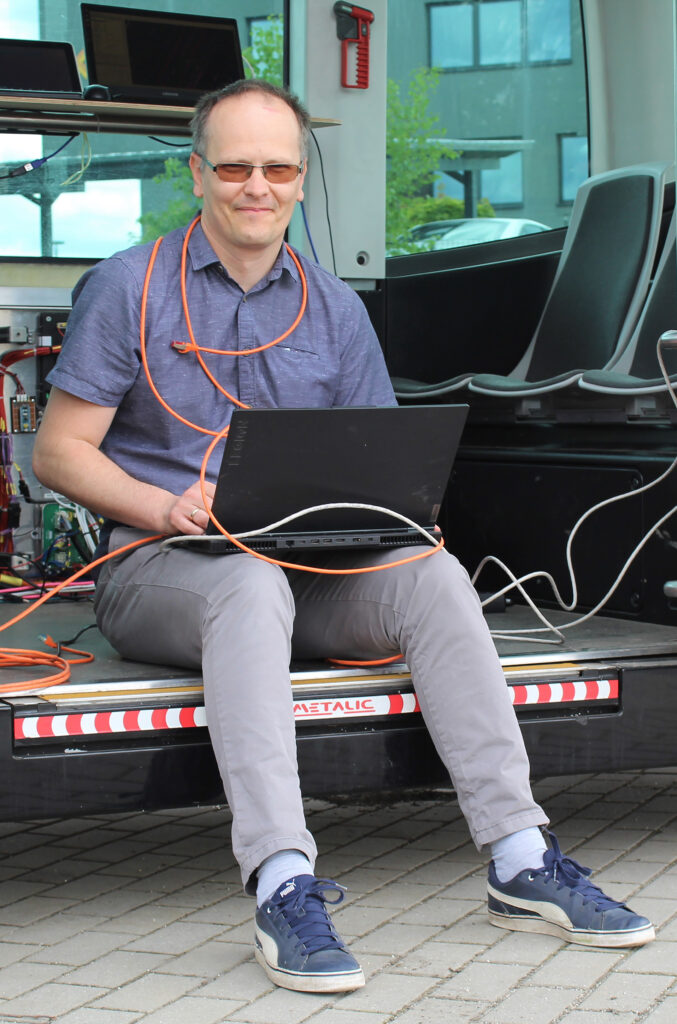 He graduated in IT at the Silesian University of Technology so long ago that he used to store his programs on 3.5-inch floppy disks and the Internet bandwidth was measured in kilobauds at the time. Since then, he has been finding the biggest joy in working with hardware so he has learned the ins and outs of programming microcontrollers. He is not afraid of ARM, Intel, C, assembler or even VHDL and he will do anything to tame registers, toolchains, and devicetrees. Debuggers and JTAGs help him with that.

When he is finally away from the keyboard and back home, he spends his free time playing with his kids as well as enjoying science fiction literature, board games, and kizomba. Lately, he has been exploring his new talent as a robotics and coding teacher at a kindergarten. The kids love playing with blocks, minirobots, and coding on the floor. However, this new role brings the most joy to himself. There are things you do not grow out of, as can also be seen in the photo.

He studies at the Silesian University of Technology. His studies and hobby projects were not enough for him so without wasting any time he embarked on his professional career to follow his interests and support our team’s work on vehicle autonomy. He is happy to take on any task involving hardware or software development. He spends a lot of time with our testing platform and sensors.

In his private life he enjoys long trips, both cycling and hiking, and loves music, including that played on one of his guitars. 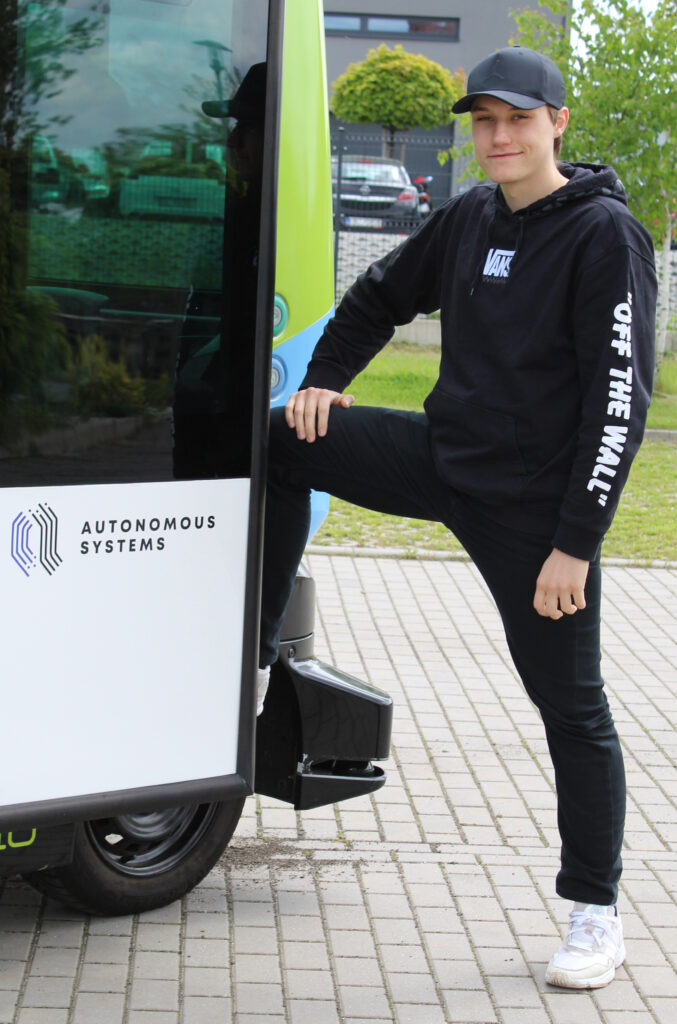 A future IT engineer. His motivation for studying and choosing this major was his desire to gain the knowledge necessary to build an autonomous lawnmower. During his studies, his attention turned to autonomous robots, which allowed him to join the Autonomous Systems team as a trainee after the first year.

As a member of our team, he is responsible primarily for CI/CD and he has gained recognition for his ongoing fresh Ubuntu installs. Paweł is an avid snowboarder and a hip-hop fan.

HOW DO WE WORK See us in action 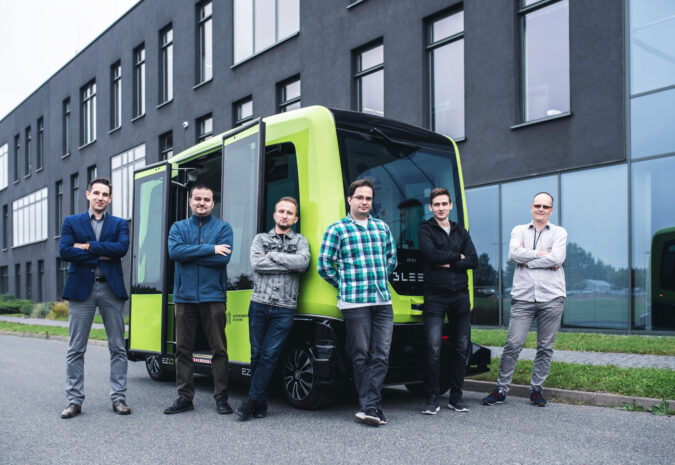 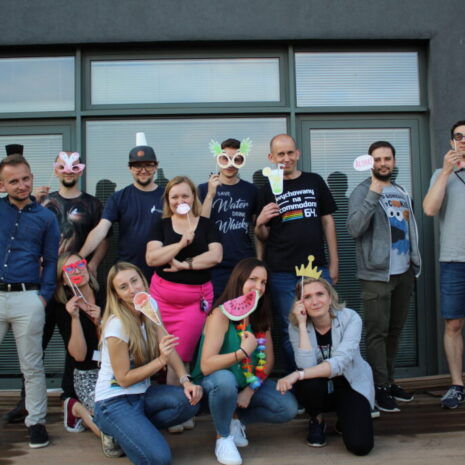 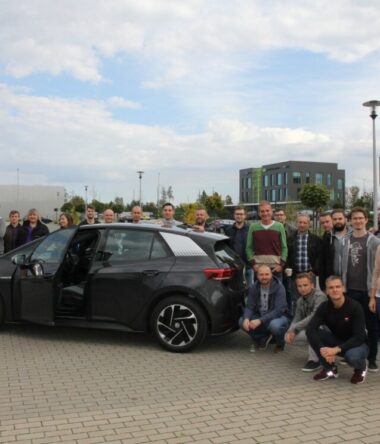 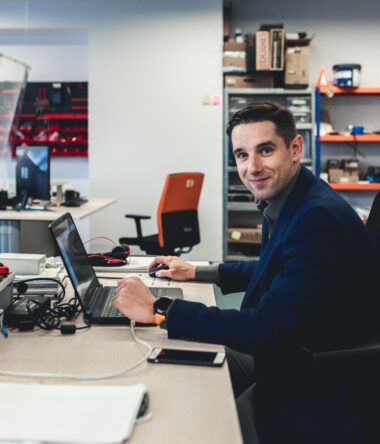 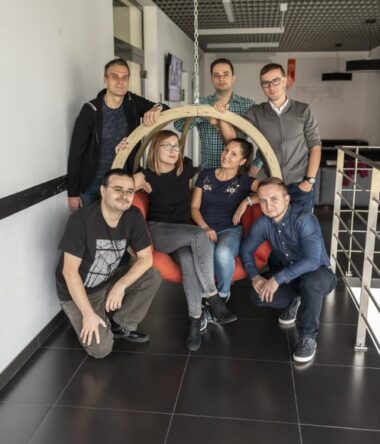 We are waiting for you :)